A Game of Thrones - LCG

"When you play the game of thrones, you win or you die. There is no middle ground."

Across the Seven Kingdoms, the Great Houses of Westeros struggle to control the Iron Throne. As the influential House Baratheon, honorable House Stark, treacherous House Lannister and fierce House Targraryen all vie in a life-or-death struggle for the future of the realm, dark and supernatural forces amass outside the kingdom’s defensive wall. Winter is coming. Do you have what it takes to emerge victorious in the only game that matters, A Game of Thrones?

A Game of Thrones: The Card Game (AGoT:tCG) is an exercise in intrigue, diplomacy, and strategy for 2-4 players, and is playable in roughly 1-2 hours. The “Core Set” includes everything that up to four players need for a self-contained and vastly replayable gaming experience. Its most compelling attribute, however, is the infinite customization afforded by the LCG™, or “Living Card Game™,” system. This innovative new way of looking at card games gives players the ability to expand their library of cards, at a relatively small cost, by purchasing monthly “chapter packs,” which offer a fixed set of sixty new cards each. This setup allows you to choose which components to include, and it shifts the advantage away from players most able to afford rare cards (a common criticism of collectible card games) to where it should be: players capable of creatively compiling the most effective deck. In short, the LCG™ system levels the playing field, providing the best features of both CCGs and standalone card games.

Whether you own only the Core Set, or you’ve collected every chapter pack available (or anywhere in between!), you’ll find AGoT:tCG to be a deep and satisfying contest of wits for yourself and up to three friends (it’s even possible to play with up to six players, as explained below!).

“Give me honorable enemies rather than ambitious ones, and I'll sleep more easily by night."

In AGoT:tCG, players take control of one of four major houses of Westeros, and they zealously compete for power (the first player that earns 15 “power tokens” is declared the winner). Each house’s deck has different strengths and weakness based on the themes, characters, and locations of George R.R. Martin’s epic series. Indeed, fans of Martin’s writing will find AGoT:tCG strikingly true to the novels, and newcomers to the saga will be drawn in by the strife, intrigue, and backstabbery that so many readers have come to love. House Stark’s strength, for example, is in their military capabilities, while House Lannister’s cards concentrate on shocking and devious manipulations of the normal flow of the game. The Core Set even includes house cards for House Greyjoy and House Martell, and with the addition of just a few chapter packs, viable decks can be built for both!


Ned felt his anger rise. "You knew of this plot, and yet you did nothing."
"I command whisperers, not warriors."
"You might have come to me earlier."
"Oh, yes, I confess it. And you would have rushed straight to the king, yes? And when Robert heard of his peril, what would he have done? I wonder."
Ned considered that. "He would have damned them all, and fought anyway, to show he did not fear them."

AGoT:tCG offers another unique element: the inclusion of a “plot deck” for each player. Near the start of each round, before the table-wide battle for power, intelligence, and military supremacy ensues, each player chooses a “plot card” from a special deck of just seven cards. These cards trigger special, thematically driven effects that will have repercussions for all players throughout the coming round and beyond. Some plot effects are positive, while others are devastatingly negative... but they all must come to pass, so players should wisely choose the order in which to reveal them throughout the game. The ever looming threat of destruction or loss due to the “plot” of the game, whether generated by your own deck or by that of an opponent, adds another level of strategic depth to this already deep game.

When the time comes for direct action against your opponents, you’ll find a wide range of choices based on your specific agenda. Unlike other card games that limit you to only one kind of “attack,” AGoT:tCG gives you three options, each with its own spoils: A “military” challenge lets you kill your opponent’s characters; an “intrigue” challenge lets you limit your opponent’s choices by discarding his cards; and a “power” challenge lets you steal his or her power tokens for yourself. Since different characters (and indeed different houses) excel at different types of challenges, you’ll find yourself constantly adapting your round-by-round strategy in exciting and compelling ways, while you secretly form a larger, long-term plan based on the strengths of your deck.

“Put not your trust in spiders, my lord."
That was scarcely anything Ned needed to be told.
"I will remember that, Maester. And I thank you for your help.”

In addition to this wealth of strategic depth, AGoT:tCG offers a robust and engaging multiplayer system. In games including three or more players, each player chooses a specific role at the start of every round. In addition to conferring special resource bonuses for the round in which they’re chosen, most roles “support” or “oppose” other roles, forbidding aggression against players they support, and rewarding aggression against those they oppose. This dynamic ensures that alliances remain short-term, and multiplayer games stay vibrant and unpredictable. Along with the inclusion of cards that potentially help your opponents, the capacity for deal-making... and deal-breaking... is vast. Be careful who you trust!


AGoT:tCG offers an experience faithful to George R.R. Martin’s beloved saga while simultaneously providing a clever and addictive game system. Whether your tactical style is underhanded or openly aggressive, diplomatic or blunt, you’ll find yourself enthralled. All of this, along with the infinite flexibility of the LCG™ system, makes A Game of Thrones: The Card Game the only game that matters... 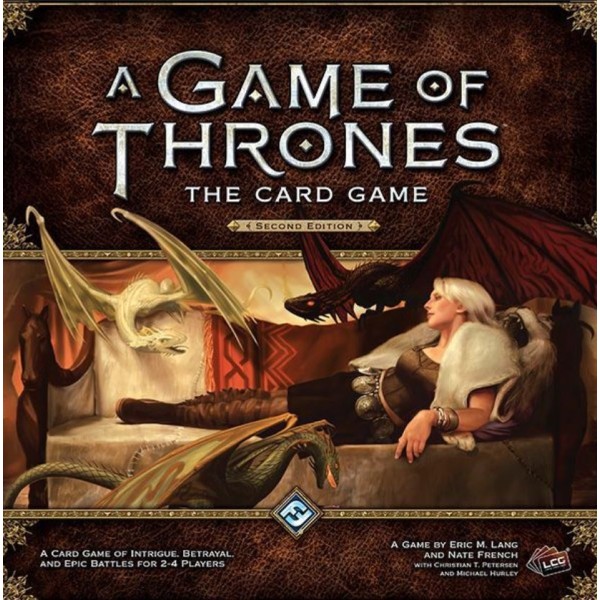 A Game of Thrones - The Card Game Second Edition

The world of Westeros is wracked with war, intrigue, and strife. The Great Houses muster armies a..