The Lord of the Rings - LCG

“Yet it is not our part to master all the tides of the world, but to do what is in us for the succour of those years wherein we are set, uprooting the evil in the fields that we know, so that those who live after may have clean earth to till. What weather they shall have is not ours to rule.”
-Gandalf, The Return of the King

An ancient evil stirs in the black lands of Mordor, and the people of Middle-earth speak of a terrible doom approaching from the east. The Dark Lord Sauron is gathering his forces, and should he acquire the power he seeks, he will cast the world into eternal shadow. The only hope lies in a heroic few who must work together to stem the tide of evil...

The Lord of the Rings: The Card Game is a cooperative card game that puts 1-2 players (or up to four with two Core Sets!) in control of the most powerful characters and artifacts of Middle-earth. Players will select heroes, gather allies, acquire artifacts, and coordinate their efforts to face Middle-earth’s most dangerous fiends. By cooperating to overcome the obstacles drawn from the encounter deck, you will complete the quest before you and claim victory!

In The Lord of the Rings: The Card Game, players take on the roles of heroes attempting to complete dangerous quests. Instead of directly retelling the classic stories that have previously been narrated, this game provides players with a variety of elements—characters, settings, enemies, events, items, artifacts, scenarios—that allow them to embark upon new adventures and share new experiences with these beloved characters during this ominous period of Middle-earth history.

Unlike most card games in which the players compete against each other, The Lord of the Rings: The Card Game is a cooperative game in which the players work together, competing against a scenario that is run automatically by the game. In each game the players attempt to overcome the particular encounters, enemies, and challenges of the scenario, against which they either win or lose together.

The Core Set includes 226 cards that can be used to assemble a wide variety of decks right out of the box. Included are three perilous quests that, along with countless combinations of settings and enemies, offer near-limitless replayability. Additionally, players can build a party from a set of 12 hero cards, and focus their decks on any combination of four distinct spheres of influence: Leadership, Lore, Spirit, and Tactics. Each sphere offer unique benefits to the party, so choose wisely!

A hero’s sphere dictates the types of cards that hero brings to a player’s disposal.

The sphere of Leadership emphasizes the charismatic and inspirational influence of a hero, and that hero’s potential to lead, inspire, and command both allies and other heroes alike.

The sphere of Lore emphasizes the potential of a hero’s mind. Intellect, wisdom, experience, and specialized knowledge are all under the domain of this sphere.

The sphere of Spirit emphasizes the strength of a hero’s will. Determination, courage, loyalty, and heart are all aspects of this sphere, which also reaches into the more supernatural aspects of Middle-earth.

The sphere of Tactics emphasizes a hero’s martial prowess, particularly as it relates to combat and to overcoming other tactical challenges that might confront the party during a quest.

While the Core Set contains everything you need to build your deck, gather your friends, and save Middle-earth, you can expand your experience further! As a Living Card Game (LCG), The Lord of the Rings: The Card Game offers a wealth of customization. Monthly 60-card expansions called Adventure Packs will feature brand new quests for the players to experience together. Additionally, these Adventure Packs bring new heroes, allies, attachments, events, and encounters to the table, ensuring unique challenges every time.What's more, a Living Card Game (LCG) offers an innovative fixed distribution method that breaks away from the traditional Collectible Card Game model. While LCGs still offer the same dynamic, expanding, and constantly evolving game play that makes CCG’s so much fun, they do away with the deterrent of the blind-buy purchase model that has burned out so many players. The end result is an innovative mix that gives you the best of both worlds! Check out the LCG website to get all the details of this exciting concept in gaming.

Gather your heroes and face the coming darkness! 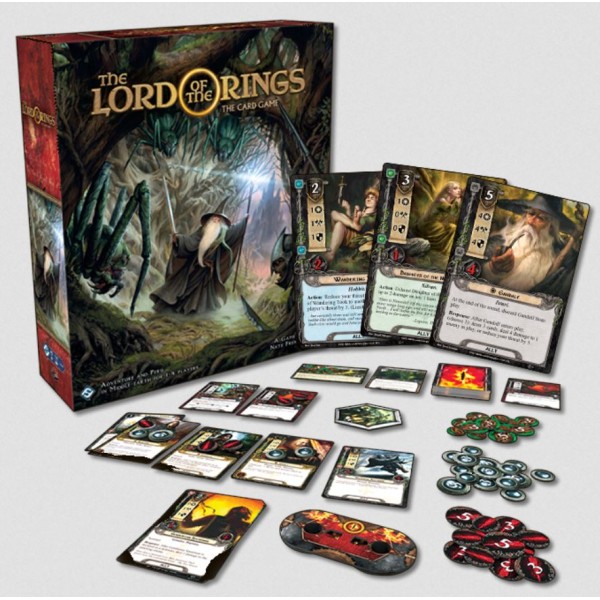 The Lord of The Rings - LCG Core Set - Revised Edition

“Yet it is not our part to master all the tides of the world, but to do what is in us for the succou..