The year is 1895, and the world is in turmoil. The wondrous inventions of Charles Babbage have launched a scientific revolution that has given the world miniaturized steam engines, electric lights and motors, arc weapons, hydrogen and helium dirigibles, road trains, calculating artillery engines, and sea and land dreadnoughts. The one thing these marvellous advances have not brought is peace. Every Great Power has been jostling its rivals for resources and the latest technology.

Although there have been few open conflicts between the major powers, a state of undeclared and secret war exists between them all. Instead of traditional warfare, governments employ small, ‘adventuring companies’ to strike against their foes, raiding factories, stealing technology and artefacts, and kidnapping or rescuing persons of importance.

In Her Majesty’s Name allows players to assemble their own adventuring companies of 4 to 15 agents, and pit them against their opponents in a tabletop battle. A small game can be played on a 24” by 24” table and typically lasts about 45 minutes. Larger games can be played on any table size and tend to last 2 to 3 hours. The game has been designed to allow maximum versatility for the players – if they can imagine it, they can create it within the system. There is, however, a wealth of material in the book that covers weird science, mystical powers, and a range of pre-generated adventuring companies, including the British Explorers’ Society, the US Secret Service, the Prussian Thule Society, Chinese Black Hand and Ancient Egyptian Cults dedicated to the restoration of the Pharaohs. 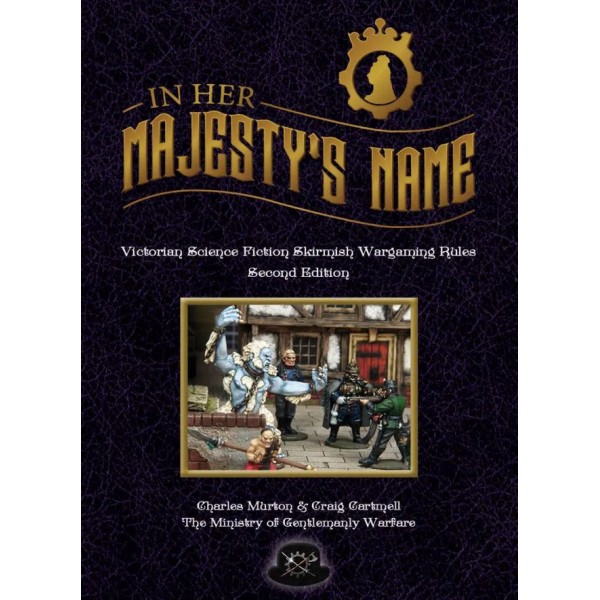 Steampunk Skirmish Wargaming Rules This is a set of skirmish rules for games with two or more pla.. 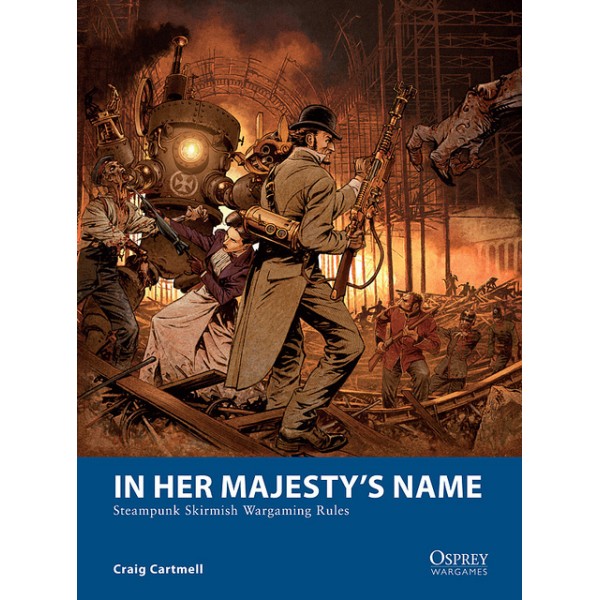 In Her Majesty's Name - Rulebook 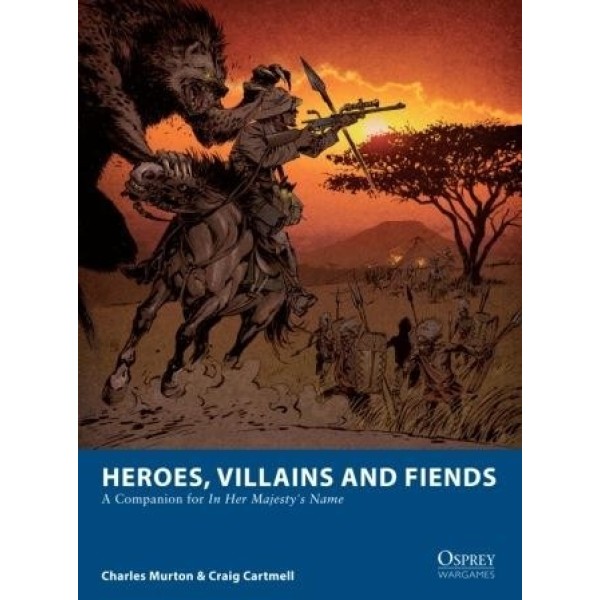 In Her Majesty's Name - Heroes Villains and Fiends 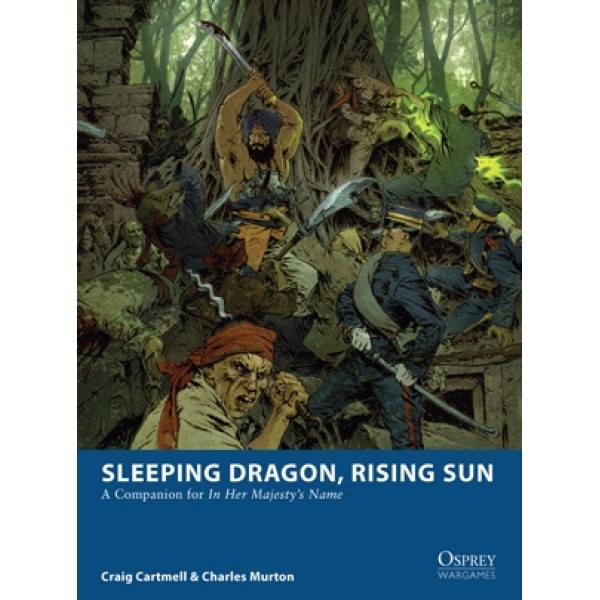 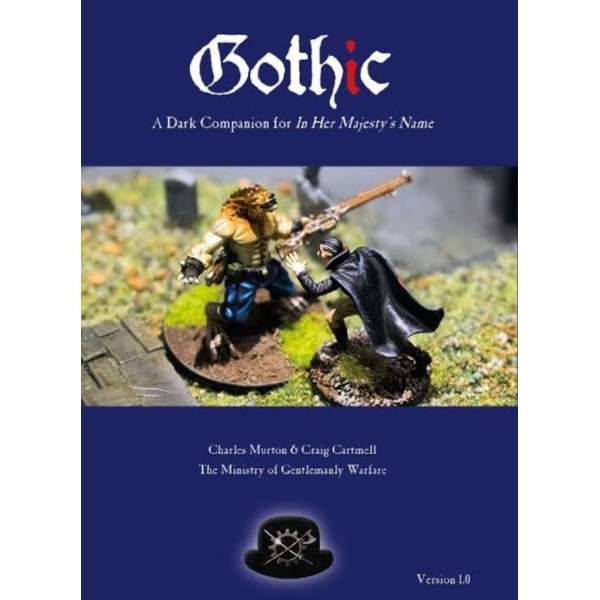 Gothic - A Dark Companion for In Her Majesty's Name

This is the third supplement for the game and has been produced by The Ministry of Gentlemanly Wa.. 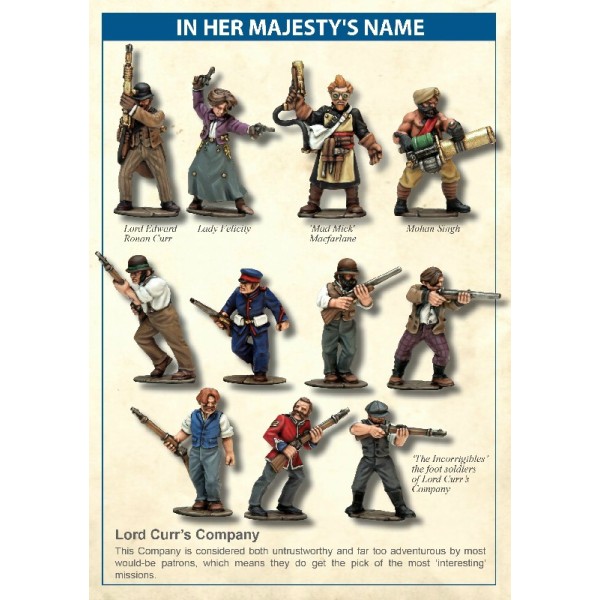 Lord Curr's Company. This Adventuring Company is made up of 11 figures: Lord Edward Ron.. 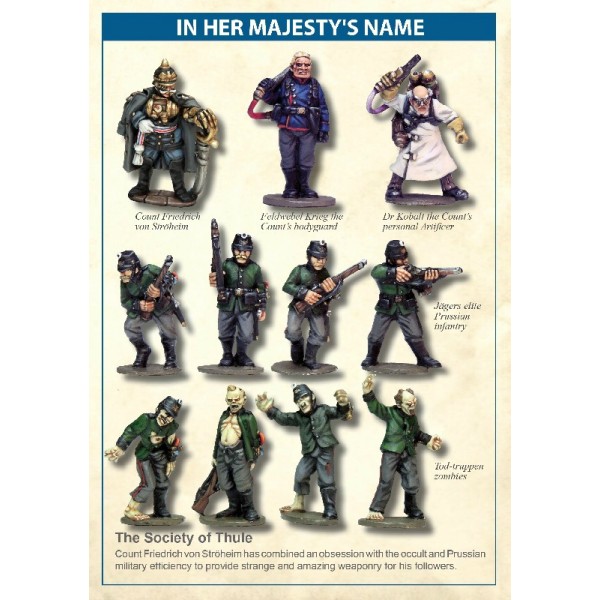 In Her Majesty's Name - The Society of the Thule

The Society of Thule. This ancient and secretive order of the Holy Roman Empire was founded .. 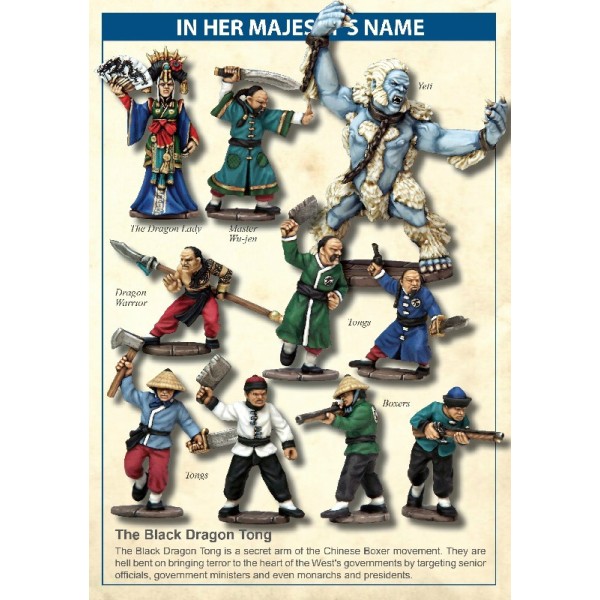 In Her Majesty's Name - The Black Dragon Tong 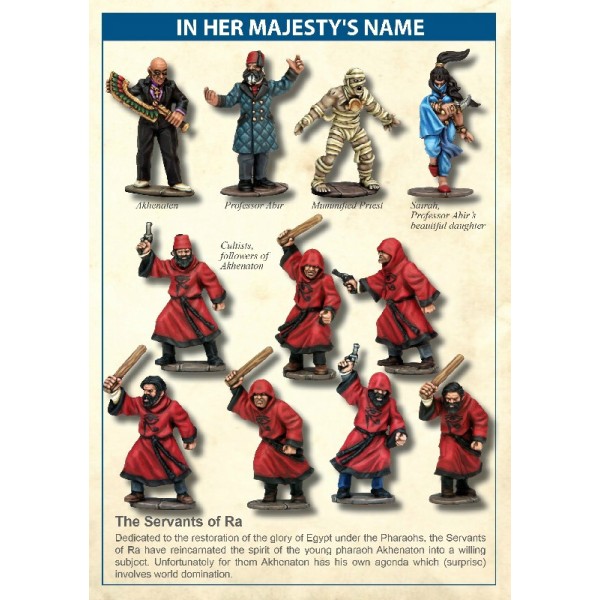 In Her Majesty's Name - The Servants of Ra

The Servants of Ra. "My name is Akhenaton, king of kings: Look on my works, ye Mighty, and d.. 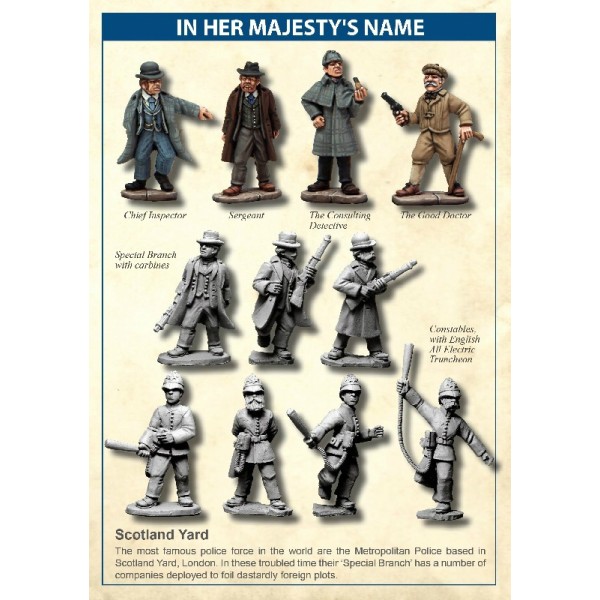 “In another life, Mr Holmes, you would have made an excellent criminal.” Inspector Le Str.. 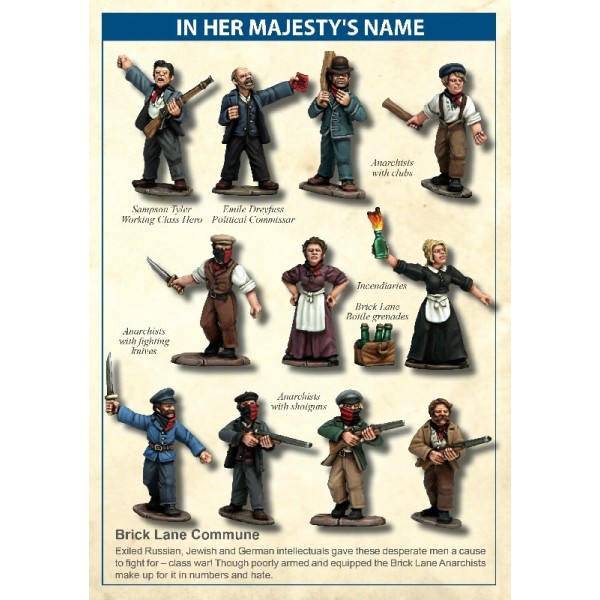 Brick Lane Commune This Adventuring Company is made up of 11 figures: For the poor the .. 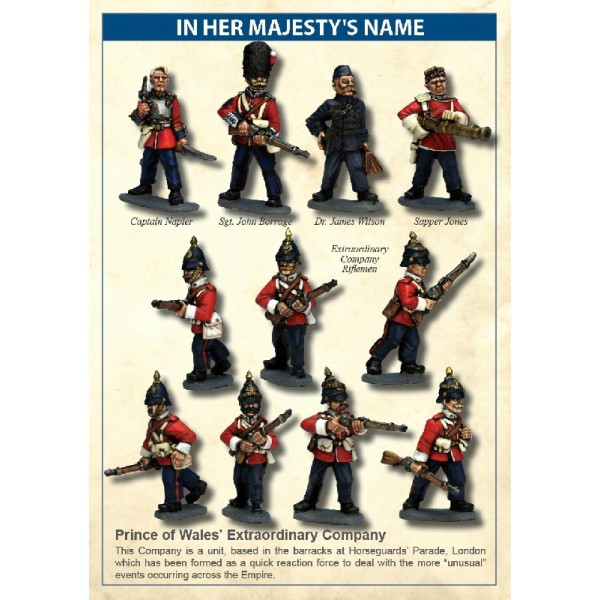 In Her Majesty's Name - Prince of Wales' Extraordinary Company

Prince of Wales' Extraordinary Company This Company is a unit, based in the barracks at Hors.. 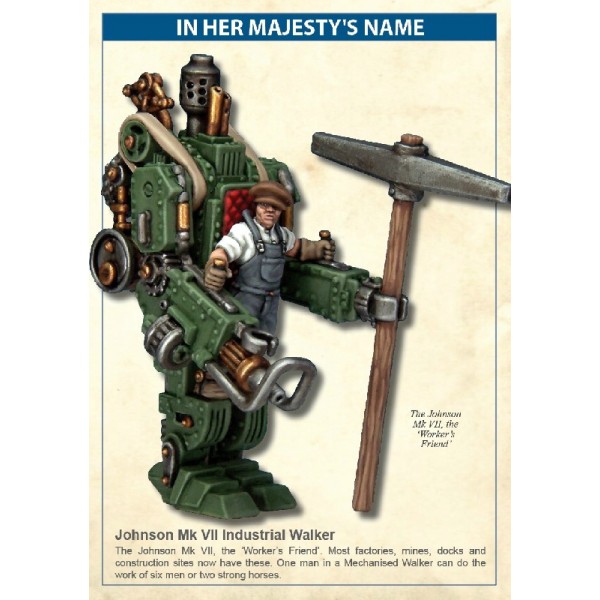 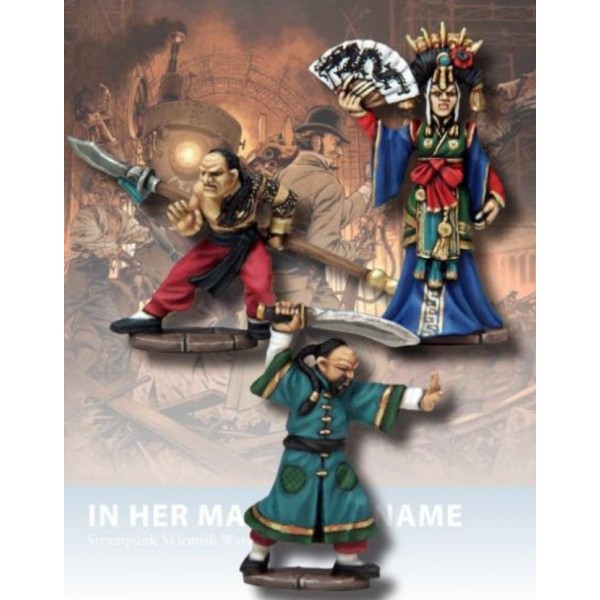 Description:   The Black Dragon Tong is a secret arm of the Chinese Boxer movement. I.. 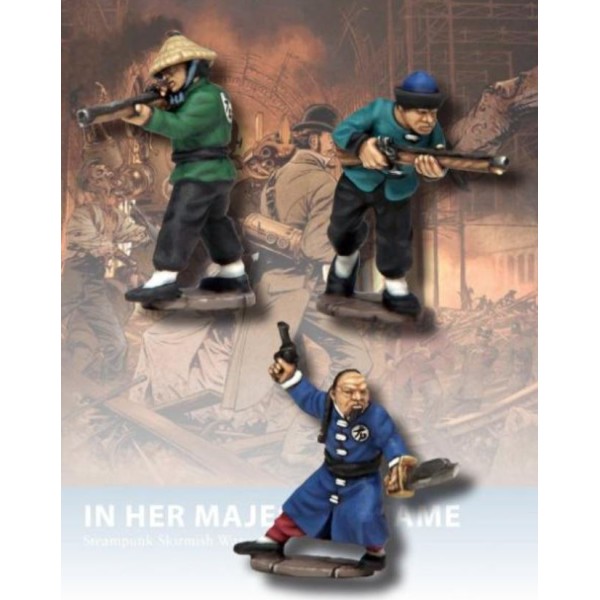 In Her Majesty's Name - Tong with Firearms Set (3)

Description:   The Black Dragon Tong is a secret arm of the Chinese Boxer movement. I..